Proof that two feet are better than one (for dancing anyway) 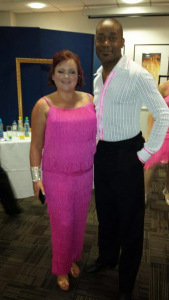 On a Sunday evening in December 2014 I received a text message on my phone from someone asking me to join them as their dance partner for charity. It was from a dancing friend I have known for some years, as we both dance modern jive, as a dance medium. She explained the background of the charity, in fact a hospice. Nottinghamshire Hospice. When she explained what they do, how much it costs to run, together with the important detail that we would have to learn the Samba and the Waltz as part of the process I said I’d check with my wife (Joanne) first, however I was initially tempted.

The goal set for each couple (the Hospice aimed for 10 couples to join) was to raise at least £700 (£350 each), which would include tickets sales for…